“Cigarette pi kar,” the prominent sign in the bus admonished, “ aage wale seat par butana mana hai.” It is forbidden to put out your cigarette on the seat in front of you.
That is the sign that greeted me one dark winter morning as I boarded a bus at the Co-operative Colony bus stand in Bokaro. I was on my way to Dhanbad to take a train to Calcutta, and then another train to Madras. (these were the days before Kolkata and Chennai, or even Bangaluru and Mumbai). From there it was a third train journey to Katpadi to reach Vellore where I studied.

The bus started at 4 in the morning, in time to get the Coal Field Express to Calcutta that started from Dhanbad at 5.45 am. At that time in the morning and in winter, it would be pitch dark and miserably cold, my father’s scooter light barely able to pierce the thick fog that enveloped us. It was a tense few hours for my parents and me as I would travel alone to Dhanbad, then the heart of the coal mafia in south Bihar. But we could not afford the price of two tickets to Dhanbad and to Howrah for my father to put me on the train south, and the cost of his return journey. Our friends thought my parents were crazy to let us travel alone in Bihar, especially in this area and at this hour of the morning. But necessity is the mother of nonchalance, and we all pretended there was nothing to it.

The bus would have other passengers stamping around, or standing around the inevitable fire where the driver and conductor warmed themselves, their faces hidden beneath a “monkey-cap” and a gamcha tied across the nose.
I would pray for at least one other woman passenger on the bus to sit next to me: often these prayers went unanswered. But the comforting thing was that conductor was most particular about the sanctity of the “Ladies’ seats” – no matter how crowded the bus, he would not allow a man to sit next to a woman even if a vacant seat was available. This rule was relaxed if the man was related to the woman.

As I settled into my seat in the front row having given up my suitcase to be stowed on top of the bus, I was grateful for these rules. I was the only woman on that early morning ride, and the bus was not full, so everyone had a place to sit. The lights in the bus were always dim but the sign in the front was specially lit and showed clearly.
In deference to the early hour, music was not played as usual, and as the bus rolled out on to the road, we settled down to a 90 minute ride to Dhanbad.

What made this bus special was that all the window panes were intact, the rexine on the seats was not slashed, the bus had a door that could be pulled shut, and the floor of the bus was complete- one did not have a close view of the road beneath the wheels as one drove along. Besides, it also issued tickets. Mine said – Maa Durga Bus Company, Bokaro to Dhanbad Ticket Rs. 20.00. and on the reverse, in small print, was the disclaimer “Management is not responsible for loss of life or luggage”. Well, I thought, so much for inspiring confidence in the passengers – only that this notice was in English which not many could read. I kept that ticket with me for many years till the ink faded away and I could no longer read it.

With the windows shut against the cold air and with the dim lights, it was quite cosy inside the bus, except for the slowly accumulating cloud of bidi smoke under the ceiling (I assume no one had reached the stage yet of  putting off their bidi butts either on the seat in front or elsewhere). The bus did not move very fast, as the Bokaro – Dhanbad road is notoriously bad, but even so, it lulled most of us into a doze. Including the bus driver apparently, since in a short while we came to very loud and sudden halt, accompanied by the sound of breaking glass. I cracked my head on the grill in front, and scraped my knee, and could hear other passengers cursing as they too were flung forward. “Koi baat nahin”, assured the conductor, “saala truck wala gaadi khadi karke peeche ka light nahin jalata” (Nothing is the matter. The damned truck driver parked his truck without putting on the rear lights). We had driven right into the back of a stationary truck. Thanks to the bad condition of the road, we had been driving slowly.

And with a nonchalance that did them both credit, the driver and conductor disengaged the bus from the back of the truck, removed the loose bits of broken glass from the windshield, and within ten minutes, we continued on our bumpy way to Dhanbad, the passengers and the driver wide awake now.
Posted by ramani at 8:15 PM No comments:

faithful, devoted, gentle. salma is all of these, and more. chews up everything in sight, drags me on the leash morning and evening while i attempt to walk with some dignity instead of rushing along in the neighbourhood, cries like her heart is breaking when we leave her behind and go anywhere. 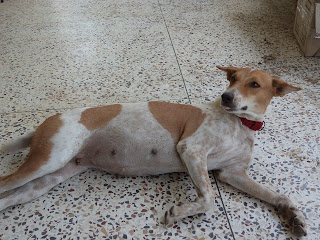 a timid puppy who was bullied by other dogs in the street, she took a while to come inside our garden gate to eat. then more regularly when she was pregnant, till she had her litter. wet weather and no shelter gave her pneumonia and she almost died. we moved her and the puppies to our verandah and looked after her. that was in january this year, and she has lived with us ever since. when we moved from bilaspur to bhopal in may, no one in the street was keen to keep her. if she was a pedigreed dog we would have, but why care for a street dog? they said. so along she came with us.

though she looks forward to her daily walks on a leash, hers is a free soul, and she loves nothing better than to walk free when she can race ahead, come back to meet us, then dash away again.