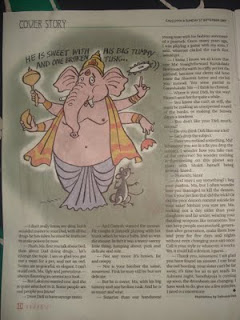 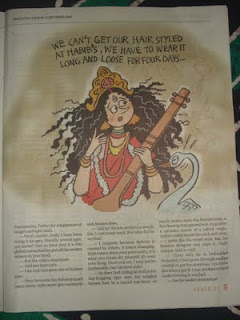 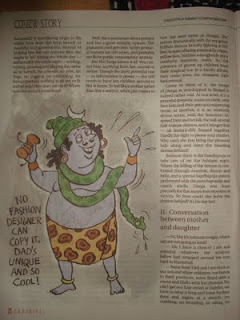 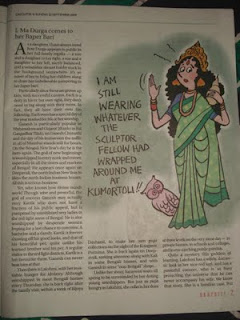 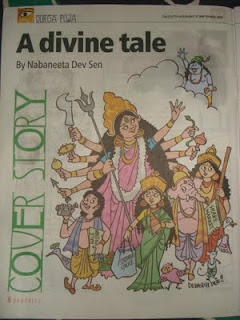 here are the scanned pics with the durga puja article of yesterday. only you read them from below up.
Posted by ramani at 6:29 AM 1 comment:

my friend and colleague biswaroop sent me this mail this evening. i hope you enjoy reading it as much as i did. happy vijay dashami, everyone.

As far as Bongs (Bengalis) are concerned, there are only three kinds of people on earth:

Bongs: They inhabit the Middle Kingdom and are the only people who really matter. We probashi Bongs or expatriate Bongs are cousins thrice removed, acknowledged only when we make it good in Bollywood.

Non-Bongs: All other people who don’t matter. We cannot afford to say it in as many words, now that we have fallen on such hard times having to queue up for all the jobs before the non-Bongs).

One thing about Bongs that baffles non-Bongs is the mammoth enthusiasm about Durga Pujo that never translates into communal riots. Well, to begin with, the legend of Durga is such a bizarre, rich and heady mix of colourful mythology, high theology, and superb iconography (something like Jesus, the angels, Santa Claus, and the reindeers rolled into one) that it would be difficult for anyone to misappropriate it to suit narrow ends. Just imagine a Dravidian mother goddess elevated to the high table of the Aryan pantheon and showered with armaments by Aryan deities such as Agni and Brahma, just to make her kill a Dravidian asura in a masterly stroke of realpolitik. And think of the ultimate image makeover: the transformation of a fierce demon-slayer into a demure Bengali girl, who visits her parents on earth for four days every year with the four kids in tow. Portraying George Bush as Mother Teresa can only come a distant second. If you want to turn this spectacle into a mascot for mischief, where could you possibly start?

Perhaps it also helps that her devotees in Bengal are quite an irreverent lot themselves. Lots of Bongs these days take their faith lightly without belittling it and tend to be religious without being officious about religion. Every year, there are spoofs on Durga and her family in popular magazines and weekend supplements of major newspapers around the time of Durga Pujo. Thank goodness that we have not had champions of the faith storming the office of the Ananda Bazar Patrika to protect the honour of our gods, at least not quite yet. With luminaries like Buddhadeb Bhattacharya and Mamata Banerjee to look up to, this is one of the rare things that can still make you happy about life in Bengal. Vive le difference!

Unfortunately these satires are always in Bengali and that makes it a bit of a bother trying to share the fun with the non-Bongs and the hon-Bongs. This year, after ages, I have found something in a similar vein in English in the Graphiti section of the Telegraph of Calcutta. The author, Nabaneeta Dev Sen, a well-loved author, humorist, and teacher of comparative literature, needs no introduction to Bong readers. Those who don’t read Bengali might know her better as Amartya Sen’s first wife. I am attaching JPEG images of the five pages for you enjoyment in lieu of rashogollas for Bijaya Dashami. So, go ahead and join in the fun.

With shubhechchha, kola-kuli, pronaam and heartiest wishes for a wonderful year ahead, wherever you are,

i saw premlal at about 1.30 on monday afternoon in a busy OPD. he walked in, a tall burly man, whose blood pressure was recorded by the nurse outside as 150 / 110 mm Hg, which is high. i noticed his bloodshot eyes, and noted subconsciously that he did not smell of alcohol. he said he was a potter by profession and had come from neighbouring Madhya Pradesh. I asked why his eyes were red, and he said he had not slept the night before: he and his wife had travelled by bus from his village sekhwa to Pendra Road the previous night, waited at the station, then taken the train in the morning to Bilaspur and then another bus to reach Ganiyari. he complained of some non-specific low back pain, but i was more concerned with his high blood pressure.

i asked him to extend his arm so that i could measure his blood pressure again, and noticed that his hands were trembling. i asked about his alcohol consumption and he said he did drink occasionally, but not in the past month at least. i asked then why his hands were trembling and he said he had had it for the past five days. the reason? he had not been eating enough. since the previous day, all he had had to eat was one single roti: he could not afford any more.

as he said this, he turned away, frowning, and sat silently. i did not know what to say to him either.
i sent him for some investigations, and also gave him two free meal coupons to have lunch at the canteen we run at ganiyari. the free meals are courtesy some well wishers of jan swasthya sahyog.

he has been started on medication for his hypertension, and i still feel apologetic that his bloodshot eyes and trembling hands had made me wonder if he had been on a binge the night before, when the reality is so very different.

there are many premlals we see here.
Posted by ramani at 3:40 PM No comments:

tuesday's clinic at bamhni was less busy than usual: patients came in a steady stream and not all at once, which can sometimes be overwhelming. several patients with diarrhoea, two of them dehydrated. one woman very sick with pneumonia. four pregnant women, one child with a large abscess on her neck, another child with malaria, an infant with asthma. two old TB patients and one new one. a woman with rheumatoid arthritis, two patients with psychiatric illness, one with a seizure disorder on medication, four hypertensives. a man with an insect bite that has caused local necrosis, and old man with a malignancy. several with anaemia, two with otitis (a ear infection), a couple of dozen other patients with less serious problems.

and the first patient, a child, brought with abnormal behaviour for a month, when faith healing did not work. i brought him back with me to ganiyari and he is being investigated for the cause, having been started on medication to control the seizures.

patients come to the bamhni clinic from about 50 villages around, many crossing over from neighbouring madhya pradesh, walking a day or more to reach a nearby village where they stay with a relative to attend this clinic which runs on tuesdays. enterprising jeep drivers sometimes run chartered trips from a large village surhi about 10 km away, where patients can reach by bus. most come with serious problems, and the dearth of adequate medical care at an affordable price in this rural area on the border of chhattisgarh and madhya pradesh, is obvious.

this was one tuesday clinic inside a remote forest area, most tuesdays the clinic is busier and sicker than this one.

yet our Government seems to feel that people in rural areas have small problems that can be dealt with by badly trained health workers, or even a village level woman with minimal training, with no supervision or continuing support. access to secondary and tertiary level care - even primary care - is a dream for most of the population that resides outside large towns or cities.

i am glad to report that phulsita's son-in-law ajit is back at work in the glass factory at faridabad. the shard of glass apparently pierced his eyelid, and just missed the eyeball. let us hope that he continues to be safe from injuries.

this is my blogging consultant's blogsite dilip's blog .thanks a ton, dilip. just so i wont forget, trying out another link sloganmurugan's blog
Posted by ramani at 12:31 PM 1 comment: 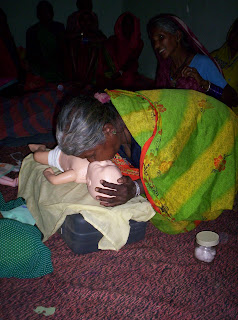 phaguni dai, a traditional birth attendant, learns on a mannikin how to resuscitate a newborn baby.
Posted by ramani at 7:55 PM No comments:

i remember this from school : is this by ogden nash?

for centuries in desert lands,
the camel tramped the burning sands.
no other beast could stand the heat,
no other had such well padded feet.
but now he doesn't travel far -
the arabs use a motor car.
Posted by ramani at 11:43 PM 1 comment:

(Chattisgarhi song)
Posted by ramani at 7:48 AM No comments:

a piece of glass

i just concluded a 2 day meeting with village health workers of villages within the achanakmaar sanctuary. again, the issue of the NREGA comes up. the health workers are angry, and give three written complaints: some who did not receive any wages at all for work done in 2008 and 2009; some who received part-wages, but for whom rs. 50 was deducted on some pretext or the other. others write that they were asked to pay rs. 50 for the photograph for the job card and those who could not pay did not get the job card: some got the card, but no payments are made without a photoID, so have not got wages.
we have worked hard, and we needed the money, they said, and we did not get it in time. now the rains are delayed, and the fields have dried up. with debts mounting, our menfolk have started migrating. to bilaspur, to bhopal, do delhi.
phulsita's husband and son-in-law have migrated to faridabad where they work in a glass factory. on monday her son-in-law called her say he had got a piece of glass in one eye and could not open it and hence had not gone to work. doctors are expensive, he told her over the phone when she urged him to seek care.
how did your son-in-law, a forest dweller who has only ever done some agricultural work, end up in a glass factory, i asked. well, she replied, beggars cant be choosers.
so now she waits for news of her son-in-law's eye: has he sought care? could someone take the piece of glass out? will he be able to see normally?
who is responsible for this? his own carelessness or the doctor who charges an unaffordable fees? the employer who does not provide safety precautions to the worker? the failed monsoon? or the NREGA that did not pay wages when it should have: a weekly payment that would have helped to prevent unmanageable debt and perhaps prevented this migration?
Posted by ramani at 6:58 AM 3 comments: