a tiger reserve in the making

the approach road from sivalkhar to sarasdol within the sanctuary has been cut across with a deep trench so that vehicles can no longer traverse it. a roundabout route through achanakmaar still did not allow access - we suddenly need a special pass from the forest officer in the block headquarters. a village we have been visiting for the past six years to support health workers providing primary health care services is now difficult to access. equally so for the villagers to reach the outside world in a case of an emergency.

meanwhile in bamhni village, six axes were confiscated this week. it is no longer allowed to cut any branches of any trees, or cut trees themselves. though the resettlement is a couple of years away at least, life is becoming difficult for people here. firewood may be gathered from what has fallen on the forest floor, but no dead logs can be split, nor can one collect wood to repair a beam of a house, or to build a hut.

returning from the shivterai clinic this afternoon, i see a forest department jeep in front of us with six confiscated pieces of slender wood, already worked on caringly to form what may become beams.

as we overtake that jeep, we are stuck behind a large truck, carrying huge logs of wood, perhaps eighty or more in that overloaded truck - tree trunks that must be at least fifty years old. each log is marked by chalk indicating the date it was logged, and its length. some more markings that i cannot understand. sold by the forest department to i am not sure who. this, of course, will not destroy the forest. what the forest dwellers need to keep alive, will.
Posted by ramani at 7:51 PM 2 comments: 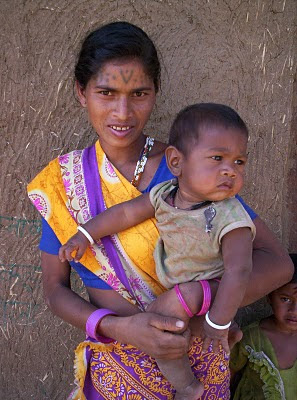 Teejmati Baiga, from Shantipur village. Displaced twice from her forest village, once for a dam, then again. Now to be displaced for a third time, she is not sure where, to make way for the Achanakmaar tiger reserve.
Posted by ramani at 9:28 PM 3 comments:

corn hanging from the roof of a hut in boiraha village, inside the achanakmaar sanctuary. 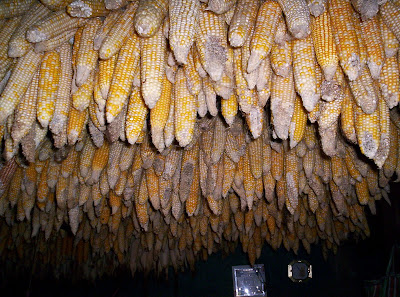 this village may not be around in a year from now, as it has be 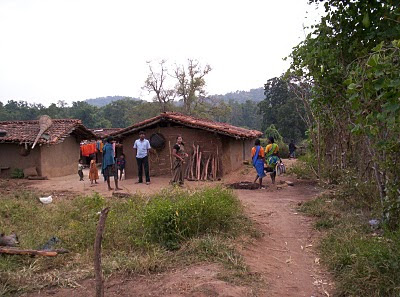 en notified to be moved as now this whole area is to be a tiger reserve.
Posted by ramani at 10:08 AM No comments: 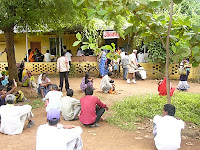 dr sitaram, this one is for you.
on wednesday, 3rd february, i was one of eight doctors in the outpatient clinic of JSS at ganiyari. cases are screened and sent to concerned specialists, so i did not get most of the ob/gyn or paediatric, or surgical cases. the following patients are who i saw as a "general" physician:
a. a 35 year old woman with hive-like lesions on her face and legs for three months, with no itching but with jhunjhuni or tingling. a slit skin smear showed 3+ AFB: a case of lepromatous leprosy.
b. the second patient was a young 28 year old woman with swelling of the body for three days, a blood pressure of 210/130, heart rate of 120, a pansystolic murmur at the apex; urine albumin 4+, and a serum creatinine of 6.8. she is on a nitroglycerine drip to bring down her blood pressure, and we need to rule out a connective tissue disorder. USG showed normal sized kidneys.
c. a diabetic hypertensive alcoholic who had discontinued all medication on his own and came with bilateral cataracts. he came because his eyesight was too poor now for him to continue tailoring.
d. a 65 year old woman with blood and mucus per rectum for three months: she had carcinoma of the lower part of the rectum, which would need resection and a colostomy. she refused even a biopsy to confirm the diagnosis, and went home.
e. a 45 year old woman with ankylosing spondylitis.
f. a 40 year old man with a three month history of upper abdominal discomfort and severe weight loss. suspected carcinoma of the stomach, referred for endoscopy and biopsy
g. a 23 year old woman with an intra-uterine death and spontaneous abortion at 7 months, with retained POC, bleeding, and post-partum depression. Hb 5.3 gm%, and refused a curettage to stop the bleeding.
h.a baiga tribal woman who i had brought back from the field clinic inside the sanctuary the previous day with a history of a fall from the "machaan" (raised wooden structure built in teh field to safeguard the crops against wild animals at night). she had a fractured acetabulum with internal dislocation of the head of the femur. she is on traction now at ganiyari
g. five patients newly diagnosed as hypertensive
h. one 25 year old boy with a liver abscess.
i. about 10 non-serious patients.

all this in one clinic in a rural area in Chhattisgarh, seen by one physician. my other colleagues saw an equal number of seriously ill patients through the day, including several emergencies. there were about 240 consultations that day. this goes on three days a week, through the year. we get patients from all over bilaspur district, and from other districts too; also from neighbouring madhya pradesh.
these are poor patients, over half of them have BMIs less than 18.5. most are backward castes, or scheduled tribes and scheduled caste patients.
the clinic is a virtual gold-mine for those who want to learn medicine, and a sure indicator of the sorry state of our public health system - we have a medical college, and the district hospital within 25 km from our clinic. and two block PHCs within a radius of 20 km from ganiyari.
it speaks volumes too, about the burden of disease in the community.
would anyone like to come and help out for any length of time? we would really appreciate it. two weeks at least would be preferable, but even one week would help if you cant spare more time. you could plan it anytime during this year, so please do give it a thought.
(the picture shows patients waiting outside the laboratory for their reports. they will then be seen by the doctor for further management, no matter how late in the day)
for more information, please contact janswasthya@gmail.com, or myself at atkuri@gmail.com
Posted by ramani at 10:29 PM 2 comments: