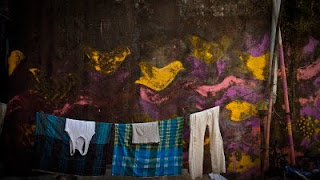 contributed by another soul with ancestors from kerala, but now from all over india like many of us. he has also kindly contributed the photograph of lungis in mumbai.

- Lungi Utao. Pungi Bhajao was the slogan used by Shiv Sena during their anti south campaign in the 70s. But then most madrasis were tamil, telugu, mangalorean, kannada and yes, malayalis.
- Bengalis also wear lungi.
- The Burmese national dress is also Lungi,
- Most brands of lungis that you buy are packaged/designed for a muslim audience and that could be Mal, Tam, Bengali.
- Kannadigas also wear lungi. Except they like to stitch the ends like a sack with a hole.

read on- this is not only about mallus: there are contributions from others as well.

Lungi - The Legend : A Tribute to Our Mallu Friends

Just as the national bird of Kerala is Mosquito, the national dress is 'Lungi'. Pronounced as 'Lu' as in loo and 'ngi ' as in 'mongey', a lungi can be identified by its floral or window-curtain pattern. 'Mundu' is the white variation of lungi and is worn on special occasions like hartal or bandh days, weddings and Onam.

Lungi is simple and 'down to earth' like the mallu wearing it. Lungi is the beginning and the end of evolution in its category. Wearing something on the top half of your body is optional when you are wearing a lungi. Lungi is a strategic dress. It's like a one-size-fits-all-bottoms for Keralites.

The technique of wearing a lungi/mundu is passed on from generation to generation through word of mouth like the British Constitution. If you think it is an easy task wearing it, just try it once! It requires techniques like breath control and yoga that is a notch higher than sudarshan kriya of AOL. A lungi/mundu when perfectly worn won't come off even in a quake of 8 on the richter scale. A lungi is not attached to the waist using duct tape, staple, rope or velcro. It's a bit of mallu magic whose formula is a closely guarded secret like the Coca Cola chemicals.

A lungi can be worn 'Full Mast' or 'Half Mast' like a national flag. A 'Full Mast' lungi is when you are showing respect to an elderly or the dead. Wearing it at full mast has a lot of disadvantages. A major handicap is when a dog runs after you. When you are wearing a lungi/mundu at full mast, the advantage is mainly for the female onlookers who are spared the ordeal of swooning at the sight of hairy legs.

Wearing a lungi 'Half Mast' is when you wear it exposing yourself like those C-grade movie starlets. A mallu can play cricket, football or simbly run when the lungi is worn at half mast. A mallu can even climb a coconut tree wearing lungi at half mast. "It's not good manners, especially for ladies from decent families, to look up at a mallu climbing a coconut tree"- Confucius

Most mallus do the traditional dance kudiyattam. Kudi means drinking alcohol and yattam, pronounced aattam, means random movement of the male body. Note that 'y' is silent. When you are drinking, you drink, there is no 'y'. Any alcohol related "festival" can be enjoyed to the maximum when you are topless with lungi at half-mast and a towel tied around the head. "Half mast lungi makes it easy to dance and shake legs" says Candelaria Amaranto, a Salsa teacher from Spain after watching 'kudiyaattam' .

The 'Lungi Wearing Mallu Union' [LUWMU, pronounced LOVE MU], an NGO which works towards the 'upliftment' of the lungi, strongly disapproves of the GenNext tendency of wearing Bermuda shorts under the lungi. Bermudas under the lungi is a conspiracy by the CIA. It's a disgrace to see a person wearing Bermudas with corporate logos under his lungi. What they don't know is how much these corporates are limiting their freedom of movement and expression.

A mallu wears his lungi round the year. It's all weather, all season versatility has no match. A mallu celebrates winter by wearing a colourful lungi with a floral pattern. Yet in summer, a lungi provides good ventilation and brings down the heat between the legs. A mallu is scared of global warming more than anyone else in the world. If despite wearing a lungi you feel the heat, you can use the ends of the lungi to fan your heated parts.

Confirmation from a friend from Kerala:

Of course, there is nothing more liberating than a lungi. It is truly a free flowing garment and colourful too. But the modern gen is not very impressed. My kids have banned lungis in our house – probably they are in cahoots with the Bermuda manufacturers. So I have to go around wearing shorts – like an overgrown school boy :-)

An objection from West Bengal:

How come the lungi is considered something only Mallus wear? As far as I know lungis are favoured casual wear in (at least) West Bengal, Orissa, Bihar, and even in Punjab, where it is worn slightly hitched on one side - as anyone who has watched Bhangra dancers will have noticed.

And a protest from a true Tamilian:

I am deeply offended that no one has pointed out the fact that Lungi's history is incomplete without acknowledging the contribution of the Lungi Clad Tamil Desi [LCTD] to this great tradition. Who can forget the ishhtyle of the quintessential LCTD traveling in a bus, his mundu folded and worn high about mid-thigh level, and upon being asked by the conductor to pay the fare, accede to the request by standing tall, with one arm holding on to the rail (primarily to quell newtonian forces because the driver always 'full take a fast' on hearing the biggle [whistle]) reaching deep into the pocket of a long multicoloured Nijar [shorts] allowing the lungi to ride even higher.

Ofcourse I concede that accidents happen sometimes, when the LCTD executes the manouevre only to discover that the long shorts are missing causing the conductor to use the aforementioned biggle again-this time to admonish the LCTD to drop the Lungi immediately forthwith ["Lungi erukku pa- bus iley ladies irukkanga"] and let him get off the bus [" Kasu illaiya? nataraja nata!"]