the achanakmaar sanctuary is now to be a tiger reserve under project tiger. this means about 28 villages currently in the sanctuary (and who have been there for several generations) have to move. they will be relocated outside the sanctuary. work on this has already begun: several acres of what is called "degraded forest" is being cleared to provide land for resettlement. villagers have been told that if they don't move now, there will be no land for them later. two villages have already moved: only to find that they have to live under a plastic sheet in this cold weather.

a team from calcutta is busy conducting an anthropological survey of the villages - including an anthropometric survey of children below five. apparently to see what happens to their nutritional status once they are resettled. does it matter? can a severely malnourished child get more malnourished? and what will happen if the child does worsen? - the government will think of some scheme for them, was the answer.

there has been no notice given in writing. nothing to say where each village will be settled, what facilities they will get, what compensation, nothing. it has so far only been by word of mouth, and petty officials scaring the people in the forest. many have not received their pattas under the new forest bill yet, so will not be eligible for much compensation in a court of law.

communities inside the forest are mixed: tribals and non-tribals. however, they have been told the rehabilitation package is only for the tribals and not for others. where will the others go? the yadavs, for example, who tend to the cattle?

an RTI application was filed by one of the villagers last week, asking for information about the proposed displacement. last weekend there was also a meeting of people from 18 villages in the forest, resolving not to move till they were given something in writing; till they were assured of a decent life elsewhere. we have lived in harmony with the forest, they say, we should be left here. a fledgling group is born, trying to take tentative steps to stand up against "authority" as represented by the forest department and other government officials. and the innate diffidence has to be overcome.

two days after the meeting, the sanctuary in charge visited the village in the evening: well after dark, to meet the person who had filed the RTI application. he asked why it had been filed, why a meeting was held the previous weekend, what the applicant wanted. assurances were given that all attempts would be made to ensure that written information would be given. but the village and the person who filed the application are a bit intimidated: they have not been visited by an official before for any reason. 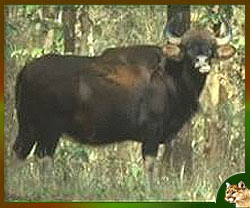 here he is - Bos frontalis, the indian bison, or gaur. males weigh from 750 to 1000 kgs and grow upto 2 metres tall. adult males and females appear to wear white stockings. older males have a ridge on the back. they are often seen in herds.

i would not want to be kicked around or gored by one.
Posted by ramani at 11:10 PM No comments: 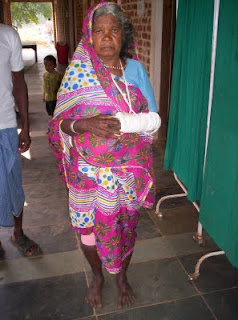 my post of September 5th showed Phaguni Dai, a TBA, learning how to resuscitate a newborn baby at our forest clinic at bamhni inside the achanakmaar sanctuary. here she is this week, admitted at our base hospital at ganiyari.

last week she was chasing a monkey from her vegetable patch in the forest, when she disturbed a bison which then attacked, gored her and probably kicked her a bit. she fell, which was lucky for her, as the bison charged to gore her again but missed her and took the bark off a nearby tree. had she still been standing, she may not have lived.

she has a fractured wrist, a huge flesh wound in the abdomen, injuries to the chest, and a collection of blood in her right knee. she is in pain, but glad her injuries were not worse. being kicked and gored by an animal weighing several hundred kilos can kill easily.

the forest department will foot the bill for her treatment, as per the rules. we wish her a speedy recovery, and hope she will be back to delivering babies again soon.
Posted by ramani at 9:52 PM No comments:

penicillin is a life-saving drug for patients unfortunate enough to have rheumatic heart disease. a very common disease some decades ago all over the country, it is still prevalent in poor communities who have little access to health care. the heart valves are damaged and are more prone to getting infected. in order to prevent this, a three-weekly dose of long acting penicillin is given as an injection. this is a cheap and very effective method.
suddenly last week we realised that we were out of stock of benzathine penicillin (as the long acting penicillin is called), and could not get any in bilaspur town. nor in raipur.
as i happened to be travelling in hyderabad, i was asked to purchase 1000 vials from there if i could. my only concern was whether or not i could carry the weight back in my suitcase. i set out to the nearest drugstore and found that it was not available: it is not available in the market, i was told.
not quite believing him, i asked in another shop, and another, and another : with the same response. i looked up the directory and contacted two of the largest drug stores in the city - one said they had enough vials for me. i went there the next morning, only to find that they had no stocks - they thought i needed four or five vials.
i returned via nagpur yesterday and my cousin drove me around several large drug stores, with the same results: no benzathine penicillin is available in the market. one shop had seven vials, and refused to take an order with an advance since they could not assure me when the order could be met.
meanwhile our organization contacted LOCOST in baroda who located 500 vials in ahmedabad, which are being mailed to us.
i wonder if anyone else is facing the same shortage? what is happening to all the patients with rheumatic heart disease - of whom there must be several millions in india? why has this suddenly happened? why is this cheap and life-saving drug not available easily? any answers, anyone?
and if anyone can locate about 1000 vials of the medicine (brand names: longacillin, penidure LA12), please write in.
Posted by ramani at 9:36 PM No comments: