It makes a difference. 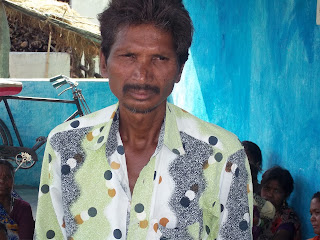 Picture of Choitram Baiga of Bahaoud village, taken last week. He is on treatment for multi-drug resistant tuberculosis. I had written about him here six months ago. I can hardly believe it is the same man. Shows what food, rest and medicines together can achieve.
Posted by ramani at 11:20 PM 1 comment:

i first met Lakshmi Sabar in 1994. i had suspected her of having tuberculosis in the small village clinic i ran at Koinpur in the Mahendratanaya hill range, and when her sputum was negative for TB, i sent her to government district hospital at Parlakhemundi for a chest X-ray. she made three visits there - the first time there was no electricity, the second time there was no X-ray film available, the third time the X-ray technician was on leave.

each visit required a walk down from the hills to the nearest bus stop three hours away across the border in Andhra Pradesh, then a bus ride to Parlakhemundi, and then the journey back if she caught the bus in time. given the demands of trying to eke a living on the deforested patch of land they lived on, and her own poor health and lack of money to make the bus journey and to pay at the hospital, each visit was made at an interval of two or three months.

her 2 year old son, who had also started coughing and becoming thinner and sicker, died in the interim. she took him along once to the district hospital where he was prescribed expensive tonics which she did not buy. on her fourth visit (a month after her son died) she was finally started on anti-TB drugs.

three weeks later, i got a frantic call from the field staff - lakshmi sabar had gone mad, and was running around the village shouting and tearing off her clothes. could i come and see what could be done?

i realised this was INH pyschosis (a drug reaction sometimes caused by one of the anti-TB drugs) and persuaded her husband to bring her back with me to the main campus outside Berhampur where we had a small dispensary with in-patient facilities. there were three other patients admitted, recovering from severe malaria and from pneumonia. i was a bit hesitant to introduce this woman with an acute psychosis in their midst, but told them that her behaviour was due to the medicines she was taking.

the other patients were surprisingly welcoming and considerate of Lakshmi. one day she would lie all day underneath the cot. the next day she would manage to climb on top of the medicine cupboard and sit there most of the day. she took about ten days to return to a near-normal state of mind, but it did not seem to disturb the others at all. they empathized with her. anyone who lost a baby would be mad with grief they said. if she wants to hide under the bed all day, how does it bother us? let her be. you may say that this is due to medicines, but we know the grief of losing a child.

there was a lesson for me there.

Lakshmi became completely normal in a few weeks' time and we re-started her anti-TB medication. she recovered completely, and i followed her through her second pregnancy the following  year.

i wonder how Lakshmi Sabar and her family are now.