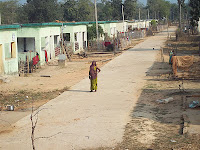 Bahoud village, relocated from within what is now the Achanakmar tiger reserve, to a place several kilometres away. It sits in plain view of the road from Bamhni to Khudia, neat rows of whitewashed buildings, complete with electricity poles along the street and wide cemented roads. This is the village that has been showcased as an example of the Government's resettlement and rehabilitation policy - surely these neatly laid out concrete houses and broad streets are far better than the inaccessible village the Baigas inhabited earlier?
Two years on, most houses have a fence of twigs around them; now in D 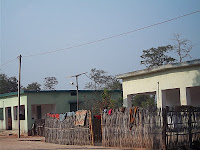 ecember, several houses have the rice harvest in, ready for threshing.
I visited the village on Friday, to follow up some patients we had seen in our clinic.
What struck me was the solar powered street lights at the corner of each street: why this in addition to electricity, I wondered. Each house has a ceiling fan fitted, as well as a CFL in two of the four rooms. Each house also had a small solar lamp they had purchased at a discount from our NGO, and this was their only source of light at night. 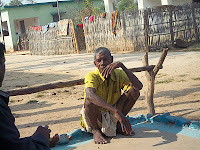 side his house warming himself in the sun. I ask him about the solar panels and the electricity poles and wires. There is no provision for electricity supply to our village, I am told. None of the villages nearby have power either.
He has been given five acres of land in this new location, but it is on a slope and does not retain water. So the rice he has harvested is the same quantity as he would get on his 1.5 acres within the forest. After the harvest, we used to supplement our income with forest produce like sal seeds, but now there is nothing, he says. Given the choice would he like to return to his original village? I ask him.
Choice? When do we ever have a choice? he answers. We were bundled here in trucks and left under a few trees, and had to live through the summer and the rains while the houses were built. Now our house has a number.
Do you own your house? Do you have any papers for it? No, he says, nothing.
What about the patta for the five acres? No, there is no talk of giving us a patta, he says. I dont know anything about it.
Why don't you ask for it through your Gram Sabha? He thinks for a while. When our Gram Sabha met, we raised the issue of another drinking water source - this large settlement has only one borewell at one end of the village. The Government had also promised to help with tractor facilities for five years to clear our land of stones, and we have asked that they be reminded of that. But it is two years now, and they have not done it, I wonder if they ever will. Tugur sounds discouraged and resigned.
It is the same story in every household I visit.
I visit the anganwadi centre in some anticipation: one of our staff had reported on CG 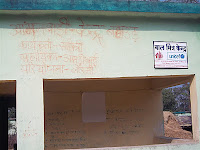 Net Swara earlier this year that the centre was not receiving rice for the children's meal, and that they had to make do with chana and murra. This had received quite a bit of publicity, and when he visited the village three weeks later, he found the children being given cooked food to eat. We felt encouraged - our report had made the difference, we thought.
The centre is run in one room of the house belonging to the helper. It was brightly decorated with charts on the wall and a mat on the floor, and scattered about it were grains of murra. I asked the helper how many children she had cooked food for that day. There are 30 children who attend, she replied, but I don't cook, since there is no rice supplied. I asked about the rice that was served in April when my colleague visited. Oh, that was the time of the Gram Suraj Abhiyan, when all the officials come to every village, she replied. Before their visit a 50kg sack of rice was provided. But after that, there has been nothing. Indeed, when I look at one of the registers kept there (no growth register or immunization register was available), the last three entries are a flurry of visits in April, with recommendations and remarks: made, no doubt before the bureaucrats and politicians descended on Bahoud for a day to listen to the problems of the aam aadmi.

Development with a human face.
Posted by ramani at 2:50 PM 1 comment: 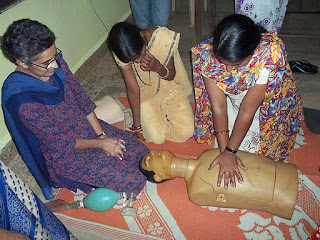 this is a picture of some of our staff learning to administer cardiac massage on a dummy. we plan to train a few people in each village in this life-saving technique.
Posted by ramani at 3:56 PM No comments: